Press Release: BenCham Beijing Appoints New Chair of the Board 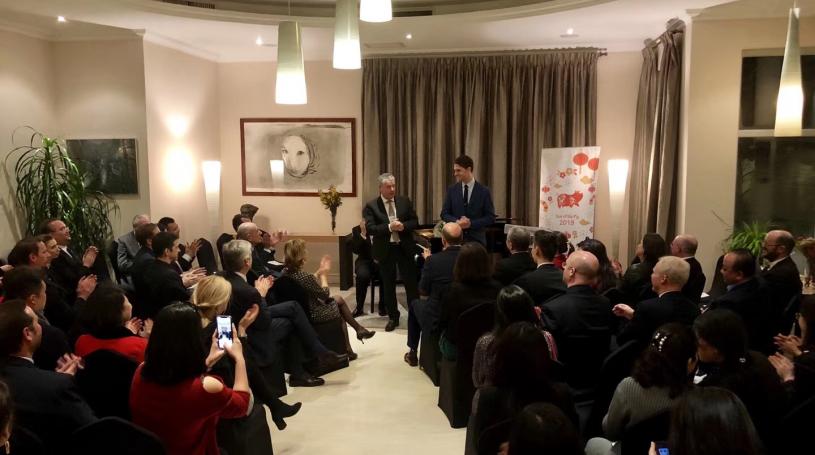 February 15, 2019, China – The Benelux Chamber of Commerce in China, Chapter Beijing, is pleased to announce that Tom Hoogendijk, Executive Board Member, has been appointed as Chair of the Board. Pierre Eloy will remain President of the Chamber and support Tom in his new role until the Annual General Meeting in May 2019.

The announcement was made at the Benelux Chinese New Year Reception at the Belgian Ambassador’s Residence. During the speech, Tom highlighted: “I’m more than motivated to take up the chairmanship of the Benelux Chamber, and would like to express my gratitude for the support I have received from my fellow BenCham board members as well from the BenCham Team. My BenCham journey started in 2017, and since then the Chamber has steadily developed itself into an increasingly influential member driven platform. As Chair of the Board I aim to continue this upwards trend by many new BenCham initiatives that serve various goals but one mission: Strengthening the Benelux business community, identifying opportunities and guiding our members through their challenges in China.”

Tom Hoogendijk is a Dutch national who has started his China journey late 2009. Holding a BBA degree in Asian Business Studies, Tom started his career in China and has been working in different branches of the advertising media industry ever since. Currently Tom is Assistant Marketing Director at Infront Sports & Media in Beijing, China. Besides his full-time role at Infront, Tom has been advising and guiding the Benelux Chamber of Commerce in the fields of branding and marketing. Tom does as well represent the Dutch business community in China with his role as States’ Representative for the Netherlands on the Supervisory Board of the European Union Chamber of Commerce in China.

We would also like to extend our sincere gratitude to Pierre Eloy who has been involved on the BenCham board for the past 6 years and chairman since 2014. Pierre Eloy: “I leave BenCham Beijing chairmanship in Tom’s capable hands, with a sense of mission accomplished. BenCham is once again in a good position to grow further, expand membership and tackle bigger challenges. BenCham is an outstanding networking platform for our Benelux business community. Our events have gained strong reputation, beyond our community. I wish Tom all the best in his new role!”