Takeaways from the Two Sessions by 1421 Consulting Group 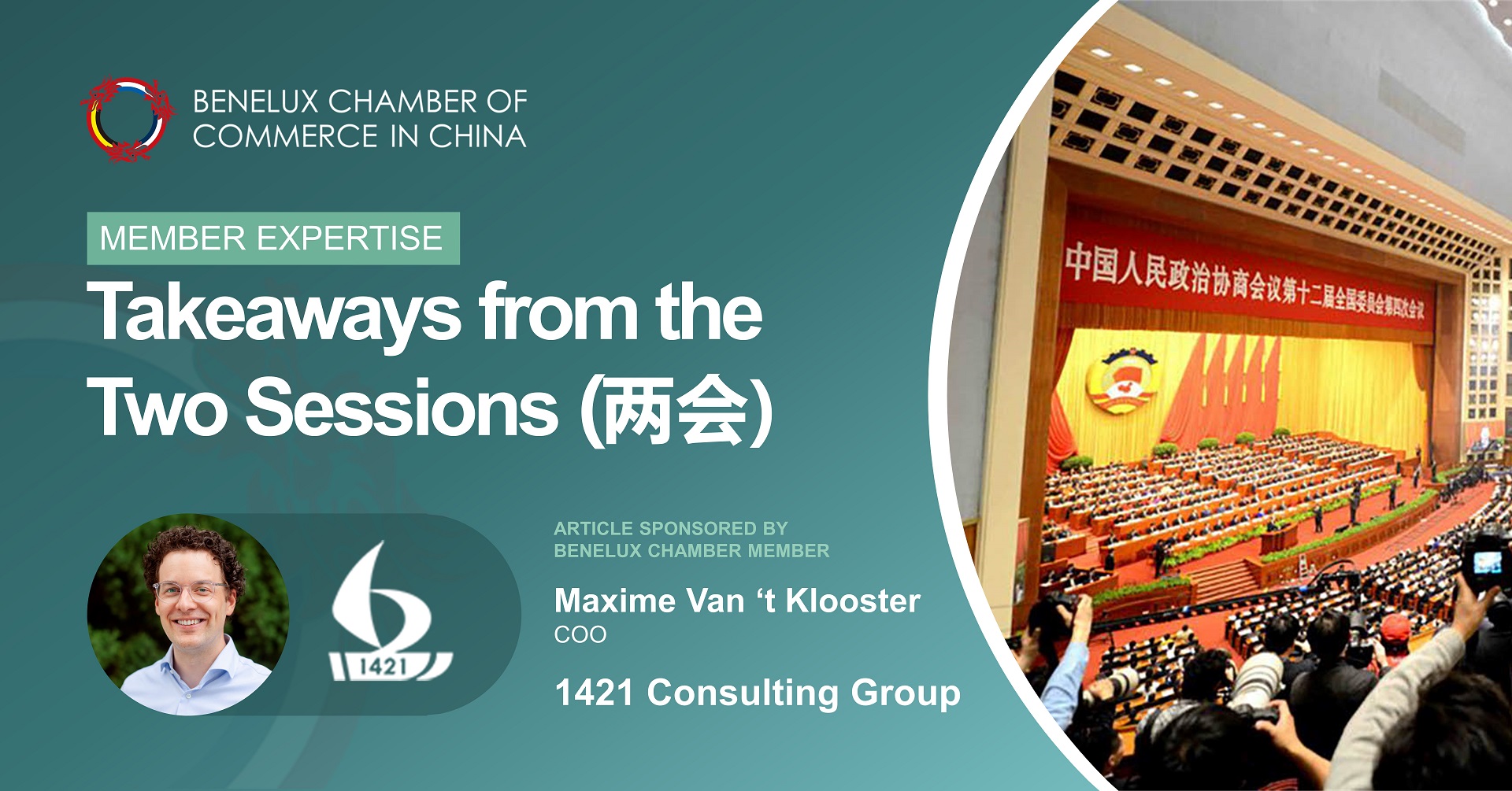 On May 22, 2020, Premier Li Keqiang deliver the report on the work of the government that highlights the progress of China and the Party over the 2019 year and the first few months of 2020. In this speech, he effectively outlines the performance of the country based on the policy targets outlined at the 2019 Two Sessions meeting and offered vague outlines for what will continue to be priorities of the Party moving forward.

Within the first few lines of his speech, it was noted by many that Li took on a more casual tone of voice when addressing the Chinese People’s Political Consultative Conference (CPPCC) and the National People’s Congress (NPC). In these opening remarks Li affirms that China will continue to fight the three great battles 1) preventing and resolving the major economic risks, 2) conducting targeted poverty reduction, and 3) controlling pollution. These themes largely led the policy goals that are reported to have been discussed in the meetings of the Two Sessions.

Despite the fact that China has largely turned to corner regarding COVID-19 infections, COVID-19 was a hot-topic at this year’s two sessions and the lessons the central government learned from the outbreak are seen in guiding policies across the board. In four separate meetings attended by President Xi Jinping he highlighted the impact of COVID-19 and stressed that while China must continue to safeguard itself against potential foreign imported infections from abroad, all of China, including hard-hit Hubei province, should resume work and contribute now to the economic recovery of the nation.

In a historic move, the Party will scrap this year’s target for GDP growth for the first time since the founding of the People’s Republic of China in 1949. This is viewed as a formal acceptance of the economic losses endured during COVID-19 and a way to modernize the monitoring of the economic situation. It is expected that China will instead look at focusing on other targets to gauge their economic stability and growth. Stable employment remains a key target for the party in their pursuit to eliminate poverty and pursue a middle-class society. CPI is also an indicator that the CCP has focused on in the past to test the strength of the economy and will likely be monitored closely this year to gauge the economic wellbeing of China.

In order to provide relief to those impacted by COVID-19, China pledged largest-ever economic rescue package of 4 trillion RMB (roughly 504 billion Euro) to save jobs and livelihoods that are put at risk due to the coronavirus outbreak. Premier Li Keqiang noted that the policy of avoiding flooding the market with excess liquidity still stands, but that the extraordinary times must call for extraordinary measures to make sure that businesses and citizens are not left in financial ruin due to the virus.

Furthermore, China seeks to amend the laws governing the People’s Bank of China (PBOC) for the first time since 2003. The PBOC, founded only 25 years ago, has become one of the most important central banks in the world’s economy. The bank will attempt to balance it’s historically core mission of maintaining currency stability alongside the Party’s modern ambitions to eradicate poverty by the year’s end and ensure stable employment figures. It will be interesting to see if some sort of “dual mandate” is included in the laws to further enshrine the economic aims of the party and provide the PBOC with multiple ways to pursue economic success. Businesses can expect to be impacted through the potential new regulations on credit, financial supervision, new consumer protection policies, and macro policy making.

One focus of the 2020 Two Sessions that has drawn the attention of many observers is the codifying of pre-existing regulation and standards into national law. One example of this is in the new draft of China’s Civil Code where businesses will be held accountable to new standards whether private or public enterprises. Even though the standards outlined have largely been in place, this move underscores China’s commitment to give the business community a message that their interests will be protected, and the market will be regulated clearly.

Furthermore, there have been discussions about the potential for allowing private citizens to sue the government. In the COVID-19 era, this move could signify that the central government wishes to support private citizens in holding their local government accountable and ensuring justice. These changes indicate the shift to a rule of law approach that will lend more accountability to the legal system throughout the country and further protect individual and business’ rights.

The Two Sessions continued to highlight the need to continue the development of China to raise people out of poverty and ensure the future of industry and agriculture. The discussions around new infrastructure projects focused on high-tech infrastructure such as 5G technology, broader uses of AI and Big Data, and smart transport technologies.

Alongside discussions surrounding China’s national development, was emphasis on ecological preservation and green initiatives. The new energy law puts clean power at the forefront of China’s policy initiatives and sets future targets for the use of clean energy throughout China. This law along with statements made affirming pollution targets for 2020 have underscored that despite the economic hits China has faced due to COVID-19, the central government will not sacrifice their commitment to eradicating pollution and pursuing sustainability initiatives in order to provide short term economic gains to the manufacturing industry.

Focus on Security and Global Posturing

There has been an immense amount focus on the national security legislation for Hong Kong. According to state media, this law is a “major move that will help safeguard national sovereignty, security and development interests, as well as Hong Kong's long-term prosperity and stability. Critics of the law note that it gives power to the central government to supersede the existing legislative structure in Hong Kong on the grounds of national security and social stability. This law, which passed as expected, seems to be mainland China’s response to Hong Kong’s inability to deal with protests that have raged on for nearly one year. Many foreign governments have spoken out against the law, with the U.S. threatening economic sanctions.

After praising the Chinese People’s Liberation Army (PLA) for their contributions to the fight against COVID-19, President Xi Jinping noted that the PLA must prepare for combat readiness through drills, battle exercises, etc. Furthermore, despite the overall spending cuts, the PLA was given a 6.6% increase in their budget for the coming year. This suggests that China is not only worried about their domestic issues of sovereignty and stability but are looking outside of their borders as well.

Now that the Two Sessions has ended, the Party looks forward to next year, when they will release their next five-year plan guiding China’s policies until 2026. The trends coming out of these historic meetings could be clues as to what will be prioritized in this next set of plans, but it will be important to monitor the results from the implementation of laws created during this Two Sessions and also the impact of the economic relief package. In the post-COVID era, China has shown they are willing to take extraordinary measures to keep pursuing resolution of their three great battles against economic risk, poverty, and pollution. Looking into this new era, the Party will have to balance their goals for continued sustainable domestic development against their desire to win these three great battles.

Maxime Van ‘t Klooster, with a Master degree in International Business from Maastricht University, has been living in China for 7 years. As COO of 1421 Consulting Group, he is responsible for the implementation of organizational strategy in their offices in Chengdu, Shenzhen & Beijing. Moreover, he leads the inbound consulting project team and oversees all corporate services for foreign clients. These experiences have given Maxime a deep insight into Chinese culture and expertise in assisting foreign companies with their China strategy. You can contact the author at: maximevantklooster@1421.consulting

China excites us, guiding Western companies drives us and the challenge of it all inspires us! That is why 1421 Consulting Group (1421) is specialized in supporting Western companies setting up and successfully growing their business in China. We offer a combination of services to help our clients reach their goals, namely; Consulting services, corporate services and bookkeeping services. More information can be found at: www.1421.consulting

The views and opinions expressed in this article are those of the author(s) and do not necessarily reflect the official views or position of the Benelux Chamber of Commerce in China.